Timothy Hare had been wanting to go solar since he moved to his town about 20 years ago. He cares about his impact on the environment and he wanted to do his part to effect change. However, his wife Janelle, being more budget minded, took some convincing.

Every time they had looked into solar in the past they encountered two big challenges: “Costs were always way outside of what we could afford,” Timothy said, “and we couldn’t find any solar installers that were working in Kentucky.”

Timothy kept his eye on the industry and would occasionally ask around to different contractor friends to get their input about solar, but he really wanted a specialist.  When Solar Holler expanded into Kentucky in 2018, he didn’t waste any time reaching out for his free solar analysis.

When we analyze a home for solar, we start with satellite imagery to assess the size, orientation and roof layout. We then run it through our advanced simulation software which uses the coordinates for your home and overlays the hourly position of the sun with zip code specific weather data. This allows us to develop an incredibly accurate projection of what the system will produce in the decades to come. We then complete an in-depth analysis of an electric bill so we can determine your usage needs. Based on their usage and sun exposure, we calculated that we could offset the Hare’s electricity consumption with 28 panels.

If it were just up to Timothy, he might have taken the plunge without financing, but Janelle wasn’t about to go for that. She had a lot of questions, so the consultation with a subject matter expert was really important to her. She needed to see that it was a wise investment, not just a neat thing to do. After we showed her the numbers and reviewed our financing options, it was clear that solar would actually be affordable.

“We looked over our budget very carefully, and when we factored in the tax credit, it really made a difference.” According to Timothy, “Janelle was easy to convince when she realized we could afford it.”

In their home, the two appliances that draw the most electricity are their dehumidifier and, of course, the air conditioner. They typically earn credits each month and only pay their $15 utility statement fee, but even in the height of summer with their AC cranking, the most he’s paid on top of his statement fee was $8. “We’re quite pleased.”

Since going solar, Timothy has locked in his costs and no longer has to worry when the utility company raises rates, “Two weeks ago I saw on the news that my electric company requested a huge rate hike, which doesn’t affect me, but it does make me angry that Kentucky is planning to limit incentives for new solar installations next year.” Timothy is referring to the pending changes to Kentucky’s net metering laws.

Being one of our first Kentucky clients meant that we were navigating the interconnection and permitting process for the first time in his town– which can be a complicated dance between local governments, utility companies and red tape.

“What I really loved was that Solar Holler took care of it all and was very professional. I’m just so grateful that I didn’t have to handle any of that myself.”

Part of Timothy’s goal was to be a living example to his community and show his town that solar is a viable option. One thing that surprised him is how solar has proven to be a great way to meet new people. “I’ve gotten to know more of my neighbors because, when I’m out in the yard, folks will just stop and ask me about our solar array. Folks I never knew will just stop and chat about solar with me.”

We never doubted that going solar would benefit the Hare’s wallet, but it’s certainly a bonus to see that it has also benefited their social life! 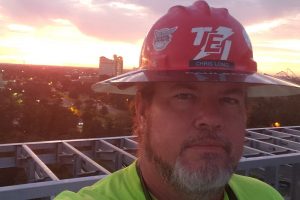 When we made the decision to join with the International[...] We’re well into February, and we’re already off to a[...]