Mike is results oriented, and he jokes that Nicole celebrates Earth Day like it’s the Super Bowl, “I wanted to save money and I wanted battery backup in case the power goes out, she’s more about ‘Mother Earth.’”

Nicole got the process started by reaching out for a free solar analysis so they could begin to evaluate all of the costs and savings. Once he saw the numbers, it was easy for Mike to get on board.

As Nicole put it, “We’d rather pay for our solar panels than pay AEP – especially since they’re getting ready to increase their rates again, and it’s only gonna keep increasing with them.” Mike added,  “Our bill is $100 cheaper in October of this year than it was at the same time last year. The results are real and tangible.”

“Our bill is $100 cheaper in October of this year than it was at the same time last year. The results are real and tangible.”

Like many families, they have a full house and use a good bit of electricity. Between the two of them and their two daughters, their household is pretty active with everyone using their devices, taking showers or running the dishwasher — and there’s always lots of laundry to do. Mike works from home, so the heat and air conditioner get a good workout too.

They say that having solar hasn’t really changed the way they use their appliances, but they take comfort in knowing that they’re saving money, “We’re just always looking for an edge to find savings and cut costs anywhere we can.”

Mike loves to watch their solar monitoring app, which lets them observe their solar production and usage on an hour by hour basis. “I like to look at the credits and check our energy independence. Even when it’s cloudy out, I check the app to see if it’s still producing –  and it is! Some days maybe it’s only 20%, but it’s not zero.”

I like to look at the credits and check our energy independence. Even when it’s cloudy out, I check the app to see if it’s still producing –  and it is!

They used our no upfront cost financing to pay for the system and were impressed with how simple it all was, “It was really easy, I was surprised. It all went smoothly. From start to finish, if we ever had any questions, everyone was super nice and knowledgeable.” The tax credit was another motivation for them, “Knowing we could get 26% back, that was a very big incentive.”

Nicole is now on a mission to get her father on board with solar, “My plan is to show him our electric bill and explain how easy and simple it was to get the financing. I think the tax credit would be a great selling point for him as well.”

Mike never considered himself a very outgoing guy, but going solar has brought them a lot of attention, “I was surprised by the people asking about it – people are interested! Even ones that I thought maybe would just criticize it were really positive.” He points out that solar doesn’t need to be a divisive issue, “It either works for your home or it doesn’t. There’s no need to get ugly about it.”

In fact, they received so much attention after their installation that they decided to host a solar lawn party to share their experience with friends and neighbors and show folks how it’s been working out for them. Going solar has made a difference for the Mayberrys and they’re eager to spread the word to others. 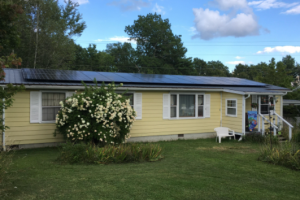 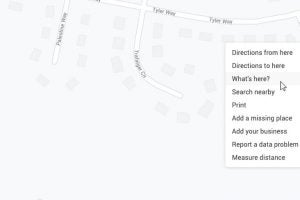 Each solar analysis we complete will include advanced sunlight &[...]

Susan with one of her panels before it went on her roof.